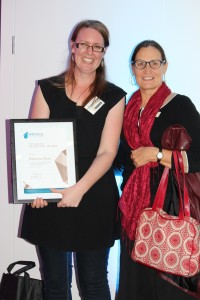 Rebecca Shaw is the recipient of this year’s WATESOL award for excellence in TESOL studies at Curtin University. The photo shows Rebecca receiving her award from WATESOL committee member Tessa Burrows.

Australian Literacy Educators’ Association (ALEA) provides information for teachers, educators and others that can be found on their website. One interesting section is called ‘Hot Topics’. Two articles currently available are written in response to current educational debates or concerns in Australia.
Article 1:
‘Indigenous Australian Theme in the Australian Curriculum: English: Necessary or Not?’ by Beryl Exley and Lisa Kevin March 2014

They outline how the theme ‘reconciliation’ can be taught through the sub strand ‘Language for Interaction’ where acknowledgement rather than participation in ‘otherness’ is the outcome. They provide a brief outline of a series of lessons that can be used to promote this by using a range of literary texts.

Article 2:
‘Lost for words: Why the best literary approaches are not reaching the classroom’ by Misty Adoniou December 2013

This article is written in response to the debate about the return to ‘phonics’ based teaching to solve our students poor literacy scores in NAPLAN and other tests. The author addresses this point by saying “…the 15 year olds who underperform on the PISA or NAPLAN know their sounds.” (page 2) She suggests that these students are performing poorly because they can’t comprehend the written text.

Reference is also made to the EAL/D students where English only is spoken and written at school. It is up to the school to teach English. As the number of non English speaking students entering our schools in Australia grows, schools are finding it difficult to ensure that these students get equal access to the learning that goes on at school.

Literacy standards of teachers are also raised – not to put down the work that the teachers do but to highlight the importance of teacher knowledge of EAL/D learners. Misty briefly discusses her workshop she delivers “10 things every teacher should know about the English language.”

The ‘phonics v whole’ debate is distracting schools from the real reason the students are struggling, she suggests. The value of rich literary texts and the importance for teachers to have a strong understanding of English grammar is necessary to promote meaningful teaching.

WATESOL is offering one current financial member, financial assistance to attend the 2014 ACTA conference. WATESOL will provide assistance to the value of $1000 for conference fees, travel and accommodation only. Any surplus costs are to be met by the participant.

The successful applicant will be required to share their experience with members through a presentation at a WATESOL event and an article in TESOL Links.

Selection will be made by the WATESOL Committee and no correspondence regarding the decision entered into.The successful applicant will need to submit travel and accommodation quotations for WATESOL approval prior to payment. A maximum of $1,000.00 will be paid by WATESOL. Any surplus will be paid by the applicant.

Please fill in the application form below and forward to WATESOL. Applications must be received by Monday, 26th May 2014.

For further information on the conference please visit their website:

It is with great pleasure that we invite you to the ISLPR Global Conference on TESOL to be held in Ankara, Turkey on 30 – 31 July 2014. We welcome abstracts/proposals for paper presentations, workshops, and snapshots of posters and or colloquia which address one of our subthemes:

We’re looking to showcase, explore and share the most exciting and empowering new developments in TESOL. We encourage you to submit an abstract by 30 June 2014.

We are looking forward to meeting you in Ankara, Turkey in July!

The ACTA Council was invited to submit submitted a response to the Australian Parliament ‘Senate Select Committee on School Funding’ inquiry. The submission draws on input from ACTA Councillors from around the country as well as the recent ACTA survey into the State of EAL/D in Australia.

The ACTA Submission is number #74

Please note: When the Senate Committee authorises the release of a submission, subsequent publication of it is protected by parliamentary privilege. Please do not download and forward the submission to others but refer them to the above website. 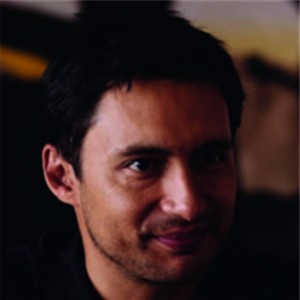 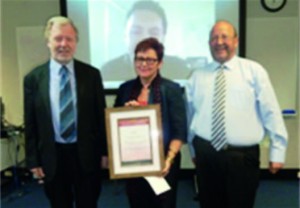 WATESOL is a not-for-profit incorporated association representing the interests of teachers and learners of English as an Additional Language or Dialect across Western Australia. Our members teach at primary, secondary and/or tertiary institutions and come from the ELICOS sector, adult migrant colleges, Catholic Education, Independent schools, and Education Department of WA.

WATESOL is a not-for-profit incorporated association representing the interests of teachers and learners of EALD across Western Australia. Our members teach at primary, secondary and/or tertiary institutions and come from the ELICOS sector, adult migrant colleges, Catholic Education, Independent schools, and Education Department of WA.